There is an episode of The West Wing where President Bartlet says “lets dangle our feet in the water” and sends Josh on a mission to appoint FEC commissioners. As the story line of the episode unfolds, Sam and Josh are in meetings trying to accomplish things that both they and the people they are dealing with know the President isn’t serious about actually doing. Everyone is frustrated. At the end of the episode Leo challenges the President to be bold and put his authority behind his staff to accomplish his goals.

President Bartlet: You came to my house, and you said, “Jed, let’s run for President.” I said, “Why?” And you said, “So that you can open your mouth and say what you think!” Where’d that part go, Leo?
Leo: You tell me, Mr. President. I don’t see a shortage of cameras or microphones around here. What the hell were you waiting for?…Everything you do says: “For God’s sakes, Leo. I don’t want to be a one-term President.”
President Bartlet: Did I not say “put our guys on the F.E.C.?”
Leo: No sir. You did not do that…You said, let’s dangle our feet in the water of whatever the hell it is we dangle our feet in, when we want to make it look like we’re trying without pissing too many people off!
President Bartlet: You’re writing a fascinating version of history, my friend.
Leo: Oh, take a look at Mandy’s memo, Mr. President, and you’ll read a fascinating version of it.
President Bartlet: You brought me in on teachers. You brought me in on capital gains. You brought me in on China. And you brought me in on guns.
Leo: Brought you in from where? You’ve never been out there on guns. You’ve never been out there on teachers. You dangle your feet, and I’m the hall monitor around here. It’s my job to make sure nobody runs too fast or goes off too far. I tell Josh to go to the Hill on campaign finance, he knows nothing’s gonna come out of it…Sam can’t get real on “Don’t Ask, Don’t Tell”, because you’re not gonna be there, and every guy sitting across the room from him knows that.
President Bartlet: Leo, if I ever told you to get aggressive about campaign finance or gays in the military, you would tell me, “Don’t run too fast or go to far.”
Leo: If you ever told me to get aggressive about anything, I’d say I serve at the pleasure of the President. But we’ll never know, sir, because I don’t think you’re ever gonna say it.
President Bartlet: I have said it, and nothing’s ever happened!
Leo: You want to see me orchestrate this right now? You want to see me mobilize these people? These people who would walk into fire if you told them to. These people who showed up to lead. These people who showed up to fight. (points to Charlie) That guy gets death threats because he’s black and he dates your daughter. He was warned: “Do not show up to this place. You’re life will be in danger.” He said, “To hell with that, I’m going anyway.” You said, “No.” Prudent, or not prudent, this 21 year old for 600 dollars a week says, “I’m going where I want to because a man stands up.” Everyone’s waiting for you. I don’t know how much longer.

Source: tvtropes.org
It’s one of my favorite episodes and the end is certainly moving. I’ve been thinking about this lately. The other day I was using the phrase “dangle my feet in the water” in reference to using design thinking in my classroom. I thought it was clever. But the more I thought about the connotation as exemplified in The West Wing episode, the more I realized it was wrong.
I have jumped in to using design thinking. It’s something that I am committed to understanding and using well. I am gathering materials to have a makerspace, and I am seeking out resources (people and readings) to help me understand and successfully implement design thinking.
Today was my second run with the Manila Folder folder challenge. I did it with my 11th & 12th grade Economics class. The benefit to this is that now all of my students 9-12 have been introduced to design thinking and I can continue to use and develop it in all my classes (I’m also teaching a Christian Apologetics class and a small section of British Literature). This run was different. I felt more confident facilitating the session, but I noticed that the kids struggled a bit more than my other class did. I’m still not entirely sure why, and I need to spend some more time reflecting on that.

While they were slow to get inspiration, they it was neat to see the inspiration come and see the focus with which they tackled developing their prototypes. They did a nice job with the challenge, and I’m looking forward to getting into content connected design challenges with them.

The question for the Manila Folder Challenge is “How might we bring joy to someone using a manila folder”. What brings joy to me is seeing high school juniors and seniors, at the end of the day, carrying home with them the manila folder light saber and basketball court made for them by a classmate. 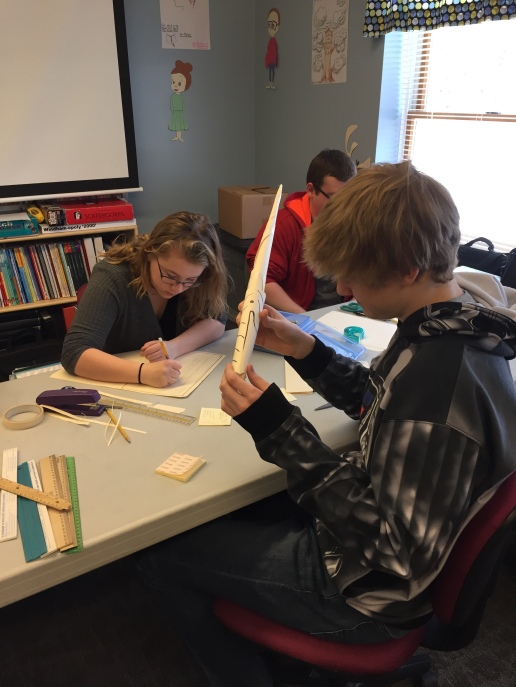 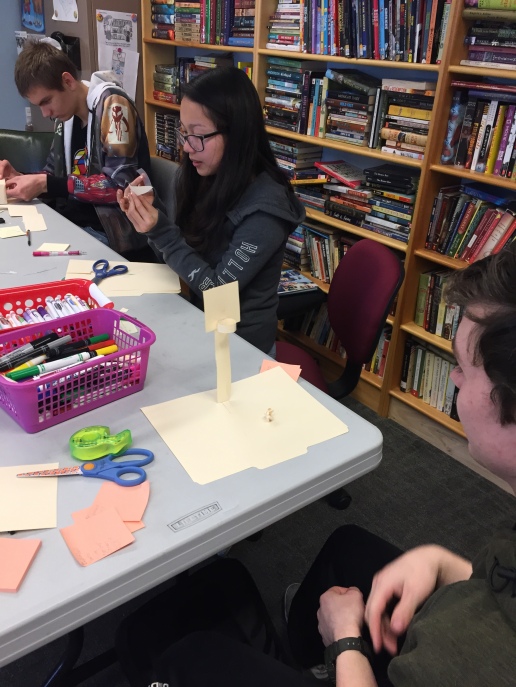